Neuro Optimization of the Bottom Line

For over seven years, MyBudget, Australia’s leading personal budget company successfully used an advertising strategy based on television commercials (TVCs) featuring client testimonials as well as a call to action by the CEO of MyBudget, Ms Tammy Barton. More recently, MyBudget launched a new advertising campaign (Breathe) that sought to evolve the communication objectives beyond client testimonials. However, following the launch of the Breathe campaign, client leads began to plateau and gradually decline for the first time in the company’s 14 year history. At the suggestion of Seven West Media (Australia’s largest media network) MyBudget engaged Neuro-Insight to identify the factors contributing to the lower effectiveness of the Breathe campaign and to identify ways to enhance the testimonial based TVCs. The current project demonstrates how the Neuro-Insight methodology and insights were integrated and readily applied to MyBudget’s marketing campaign.

The approach adopted was to critically evaluate both the Breathe style and the client-testimonial style MyBudget television advertisements using Steady State Topography (SST). This is a methodology used to measure brain activity associated with specific psychological processes such as Long-term Memory Encoding (LTME), Engagement, Approach-Withdraw, and Emotional Intensity. Long-term memory encoding at times of explicit branding and call to action is the key SST measure that was focused on in our analysis, as LTME has been validated as a powerful indicator of future (consumer) behavior.

Given the consumer-centric nature, and anecdotal problem/solution style to the client’s communications, we also explored the viewer’s engagement with the individuals in the TVCs. This enabled us to compare and contrast how resonating and relevant the different messages were processed by TV viewers.

The analysis of the Breathe style TVCs indicated that LTME at call to action moments fell below the benchmark identified as a requirement for effective brand communication. Interestingly the findings revealed that the Testimonial TVCs successfully triggered effective levels of LTME at critical message, call to action and explicit branding moments. Additionally, the consumers present in the testimonial executions, as well as Tammy Barton, revealed high levels of engagement, suggesting viewers found the execution personally relevant and relatable.

With the clear comparison of Breathe style vs Testimonial style’s Long-term memory encoding effectiveness and engagement (Fig 1 & 2), Neuro-Insight recommended that MyBudget return to the Testimonial style campaign. Furthermore, with the second-by-second analysis of key moments (message, call to action and branding) not only enabled Neuro-Insight to identify the major executional features contributing to the Breathe campaigns low eff ectiveness but also provided MyBudget with clear recommendations for further increasing the eff ectiveness of the Testimonials. 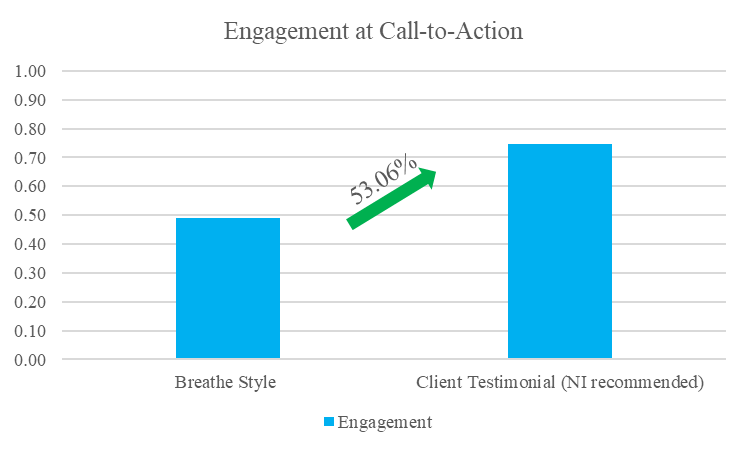 The above mentioned findings yielded two specific optimization strategies – on two different horizons: 1) An Immediate Horizon: Re-editing a specific set of previously used Testimonial TVCs. These ads were identifi ed as having key executional elements that should be included (and others that should be avoided) for eff ective testimonial-based TVCs. 2) A Long-term Strategic Shift: Neuro-Insights’ optimization was applied for casting, shooting and structure of all new TVCs.

The nature of the findings enabled the most pivotal stage of the project; the collaboration and immediate implementation of the resulting insights. The recommendation to move forward with the Testimonial campaign was adopted and the decision for MyBudget to apply further insights on optimization was made overnight. As Tammy Barton recalls; “We took the learnings obtained by the Neuro-Insight study, which was certain words that resonated, and tweaked our intro and outro. We noticed that some of the brand assets had high engagement, like our phone ring, when I came on the screen, and showing the brand throughout the ad.”

Further to strengthening the articulation and definition of MyBudget’s message (customer value proposition) in the existing Testimonials, NeuroInsight were involved in the production and testing of new Testimonials. The learnings from both studies were considered and applied to messaging, client casting, shooting and editing the television advertisement that began in January 2017. We found the mutual involvement as well as the intuitive clarity of the SST findings yielded fast, actionable and beneficial results for MyBudget.

The impact of the revised and new client testimonial TVCs was immediate. Quoting Tammy Barton, “From the day we put our old commercials (testimonials) back on the TV – we had a 15% spike (in leads). Immediately.” With respect to the results stemming from the Longterm Strategic Shift, the growth in performance appeared to continue. “I’m pleased to say that this year, every month-on-month has been a record month in the history of MyBudget,” Barton exclaims.

With the continual application of findings and testing of new testimonials, MyBudget continued to gain from the insights provided by Neuro-Insight (fi g3); “We are up 50% on the same time last year. This will be the best six months in the history for MyBudget. Our cost-per-lead’s down 20%. Spend is down and leads are up 50% on last year. It was a combination of not just hearing the research but going out and applying it. We haven’t gone and spent another million dollars or something to get those results. It’s really just been taking these learnings and applying them.”

The SST-based findings enabled us to objectively and accurately evaluate the effectiveness of two different styles of creative. Additionally, it gave MyBudget confidence to move forward and readily implement all the Neuro-Insight recommendations, thereby reaping the benefits.

This project demonstrates how SST-based neuroscience advertising research can both critically evaluate Consumer’s second-by-second response to creative content and most importantly, provide actionable insights to the client. In the current study, the findings addressed issues surrounding the marketing campaign and communications objectives of MyBudget, as well as provide confident insights for the client moving forward. A project such as this challenges all researchers to not only value current diagnostics, but to empower clients to confidently optimize their content and ultimately improve the bottom line.

This article was originally published in the Neuromarketing Yearbook. Order your copy today!